There are only a handful of wines in Australia where just one word will do to convey the seriousness and romance of the contents of the bottle?When Brian Croser planted the Tiers vineyard in the Piccadilly Valley in the Adelaide …

The quality of black currant, cherry and plum fruit showcased in this wine makes it one of the best releases under this label to date. Vanillin oak supports its rich fruit and fine supple tannins.…

This wine is improving incrementally even dure the two months since its release. Vanilla pod, almond meal, star anise and fresh orange rind converge in incredible concentration and persistence. It’s very Burgundian in shape, with ultra-fine, minerally acidity and sensational …

Former Petaluma chief winemaker Brian Croser has linked with the family that owns Bollinger Champagnes, and the Cazes family of Bordeaux, to produce site-specific Tapanappa wines of the highest quality. They come from the Whalebone vineyard in Wrattonbully, Croser’s family …

On the up Down Under 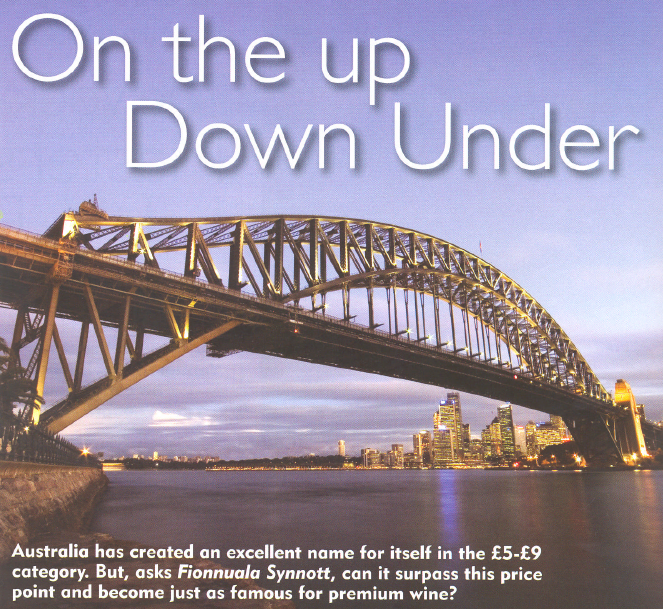 Staying true to form, the Franco-Aussie partnership started by Australian pioneer, Brian Croser, has produced a wine with great potential. It had the panel salivation; veal, grilled beef with truffles and bresaola were a few of the suggestions. 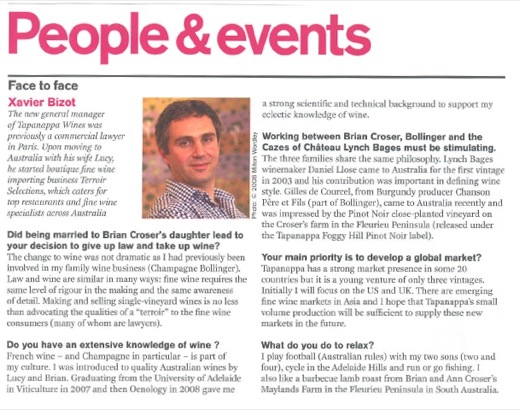 Made by Brian Croser, the Tiers Vineyard Chardonnay comes from his family’s vineyard in the Adelaide Hills. Every chardonnay technique has been applied in the making, yet the power of the fruit remains. It is focused and pure, with an …

This French-Australian collaboration has turned out a soft, easy-to-drink Merlot with notable complexity. Cassis and black cherry fruit is backed with shadings of cedar and vanilla and eased along by a creamy texture and supple tannins. Without any track record, …

Tapanappa Whalebone Vineyard was a real winner. With intense colours, the 2004 merlot shows aromas of ripe plum with the smoky eucalypt and anise edge. The

flavour offers rich, ripe fruit without being sweet, with firm tannins for a savoury …

Finely constructed, with bright fruits supported by classy oak; full bodied with ample levels of black fruits and superfine tannins, yielding a supple and surprisingly approachable young wine. May surprise with its longevity.…

Bright pale green-strawl as expected, an immaculately proportioned and balanced wine with great drive and impeccable line; all the vineyard and winemaker inputs are seamlessly welded, making flavour descriptors unnecessary.…

With Croser, Lynches-Bages and Bollinger interests behind this wine, it is no suprise that it has some serious intent. Whiffs of currants, mulberries and oak are appealing but the structure is really impressive.…

It’s not as easy as ABC

Inquiring subsequently about how exactly the Tappanappa wine had been made, I found that the yeast had been a single strain isolated from a …

Brian Croser (ex-Petaluma), among Australia’s most accomplished winemakers, and Bordeaux Legend Jean-Michel Cazes established this Wrattonbully (SA) winery in 2003. Densley coloured with a dusty/earthy nose, this has a stylish, restrained and elegant palate.…

Brian Croser has made a beautiful Adelaide Hills chardonnay, delicate and understated but with great flavour complexity and refined texture. Bright and clean with grapefruit, nutty and smoky nuances, properly dry and focused.…

Brian Croser’s first wine from a vineyard planted in 2003 on a cold, foggy 350-metre peak of the Fleurieu Peninsula. This is promising pinot from one of Australia’s most significant wine figures. But Brian, could we please have another few …

Croser’s wine, from the Tiers Vineyard (planted 1979) is an altogether more subtle wine ? luxurious but with finesse and a seamless integration of the fruit and barrel ferment and maturation elements. It just needs time in bottle.…

Nearly all you need to know about this wine is printed on the back and front labels of the bottle; for example, the fruit hails from the Foggy Hill vineyard situated at Parawa, the …

ONE DOZEN OF EACH:

A superb chardonnay by maestro Brian Croser. It’s about understated complexity; fruit, oak, malolactic and lees characters are in harmony, with concentration and finesse. All it needs is time; if it evolves like the ’05 it will be great.…

The first vintage from Brian Croser’s pioneering, close-planted pinot noir vineyard on the Fleurieu’s southern tip is a stunner: elegant cherry and undergrowth flavours, and fine, powdery tannins. Ageworth, too.

Certain politicians like to use the word “un-Australian” in a derogatory sense. I’ll use it here in a very positive way. May Australian chardonnays are driven by fruit at the expense of complexity. Relatively few combine those two key aspects …

The vineyard from which this wine comes was planted in 1974, and until recently was known as Koppamurra. I think it has already proven to be one of Australia’s great sites, and this wine reinforces my view. There are many …

The fruit component of this wine is probably as good as it gets for merlot in Australia at the moment. There’s a depth and complexity that goes way beyond the common plum and spice descriptors. There it is, merlot in …

That’s right – a pinot from Fleurieu. Mind you, the vineyard sits at 350 metres above sea level and cops a lot of fog. Given the head start that the cool Victorian regions, Tasmania and the Adelaide Hills have with …

I must admit, I was sceptical. A $45 pinot noir from the Fleurieu Peninsula – it sounds absurd. OK, so industry leader Brian Croser is behind it and he’s unlikely to engage in folly. But all things considered – well, …

If you need a reason to try Brian Croser’s pinot noirs, big name partners Bollinger and Cazes might be a good place to start.

Top producer sticks to the path of quality

Brian Croser is as close to a living legend as you will find in the Australian wine industry. All are thoroughly deserved

He has been awarded an AO, the Maurice O’Shea Award and in 2004 was named Decanter’s Man of …

The texture and harmony set this apart, despite a vegetal edge. Supple, almost sumptuous, this starts with more herb and red pepper notes than ripe cherry flavours, but it balances nicely as the finish rolls on. Drink now through 2012. …

The 2005 Tapanappa Whalebone Vineyard Merlot has scored a spot in Matthew Jukes coveted top 100 wines of 2008.

Commenting on the 2008 selection, Matthew Jukes said, ?Quentin and I always start off this process with a blank piece of … 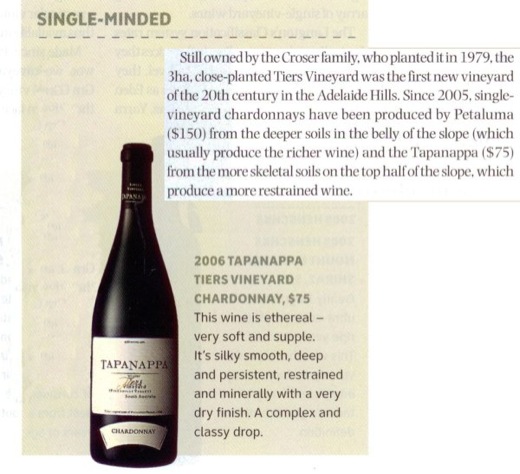 The top rated wine in the report, the 2006 Tiers Vineyard Chardonnay from Tapanappa comes from Adelaide Hills, the Piccadilly Valley. The Tiers vineyard site was planted by Brian Croser back in 1978 when …

Brian Croser’s efforts with Tiers Vineyard Chardonnay have finally paid off in a big way. This is a plump, amply textured wine that doesn?t lack for elegance, marrying scents and flavors of toasted grain with white peaches and hazelnuts. Long …

IT was pure coincidence that the day before I left Australia for my usual month in Burgundy three missives arrived, two being emails, the third a bottle of pinot noir.

The first email was an offer by Sydney’s Ultimo Wine …

This continues the strong impression made by the 2004 version of this. This is reserved but big, chocked with dusty, curranty, cedary fruit flavour and then sweet and jubey through the finish. I tasted this six months ago and it …

Unashamedly fusing Australian fruit and a Bordelaise approach, this has precise distinctive fruit aromas, swanky oak influence, some mint and milk chocolate. The dominant cabernet sauvignon has integrated completely with its minority partners, shiraz and cabernet franc; this has an …

In 2006 and 2007 I reported on my first tastings of the wines of Tapanappa, the premium Australian label launched in 2002 by Brian Croser, one of the great names of Australian winemaking.

Notably sweet, smooth texture. Just the merest hint of coffee and spice (perhaps because of the Vosges oak used? ? new and old). Good acidity but texture is really is its strong suit, from vines planted in 1979. Some creamy …

New Wines From Around the World 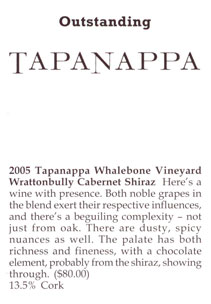 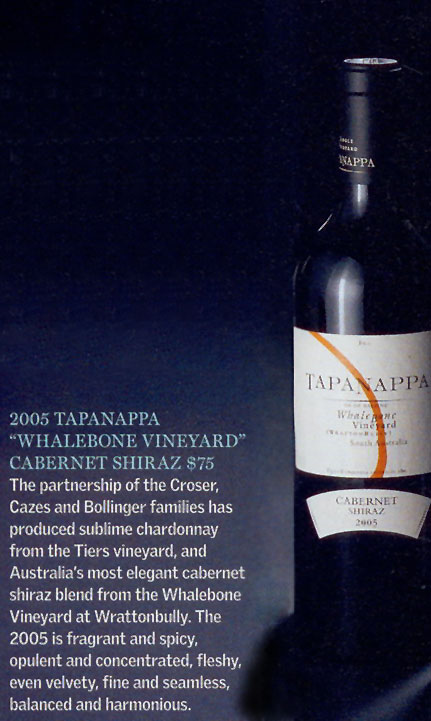 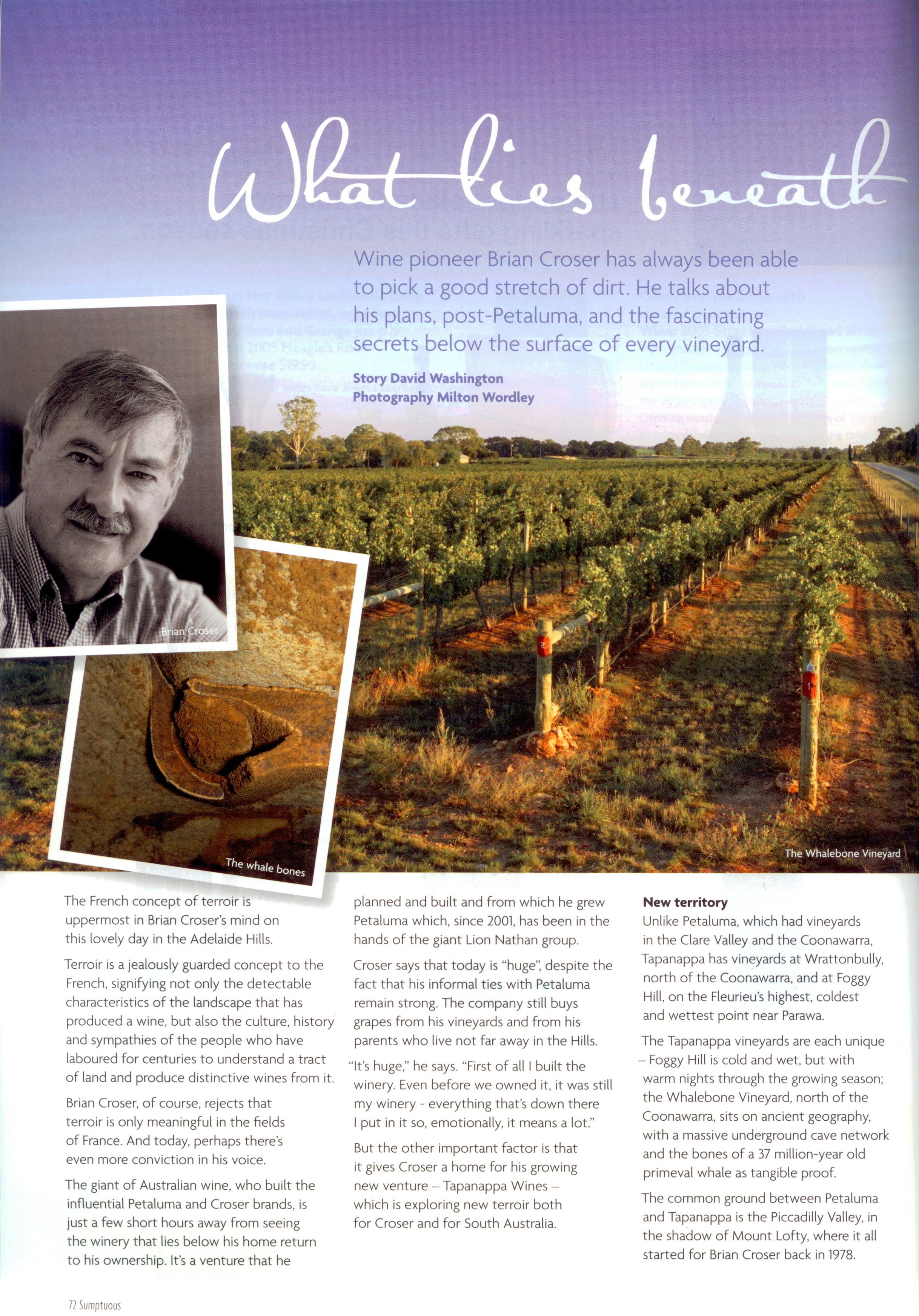 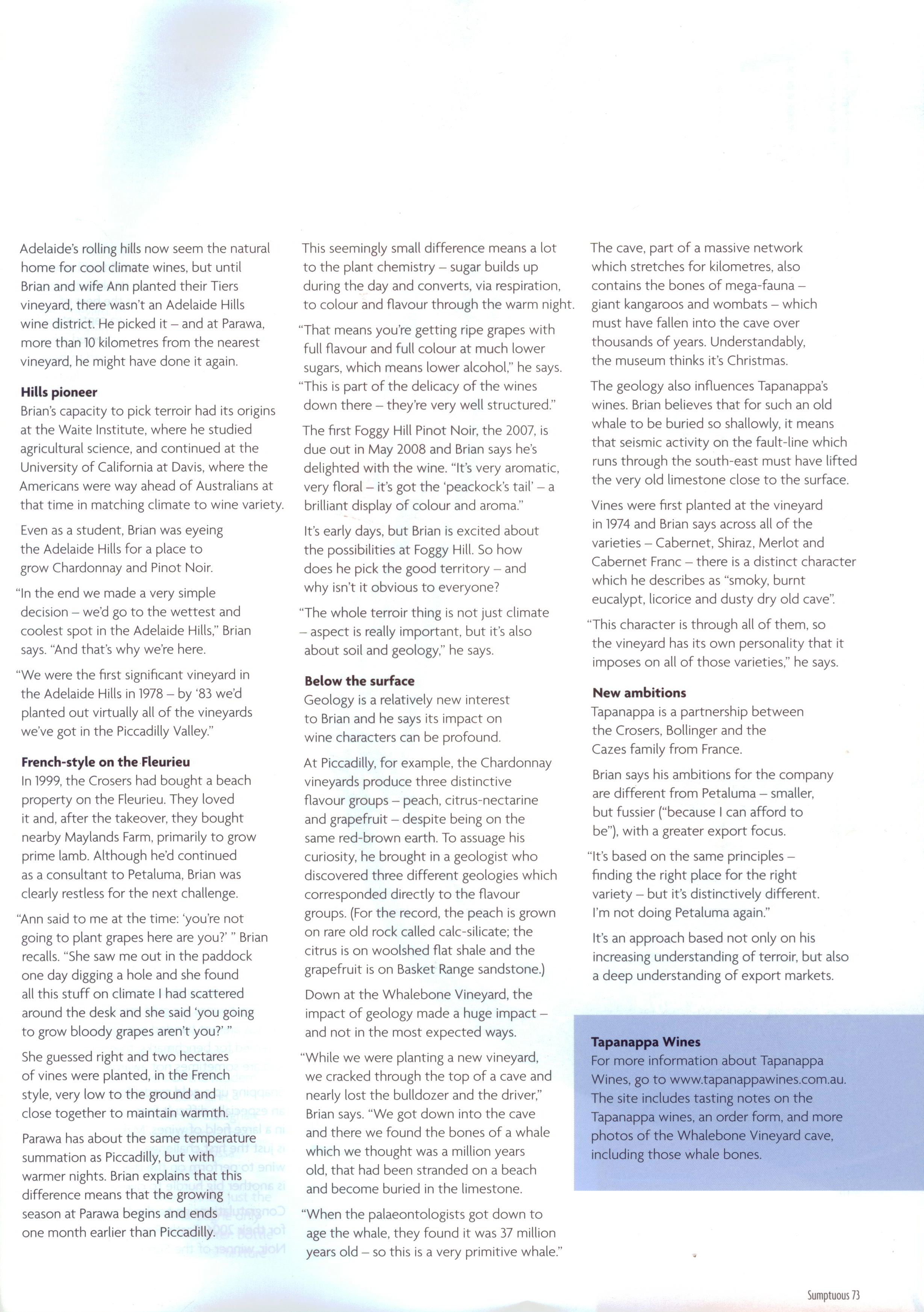 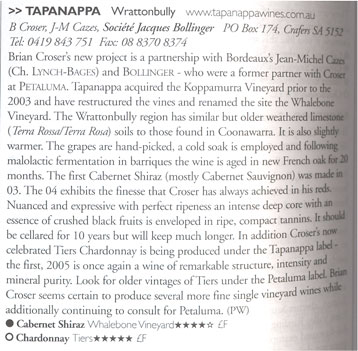 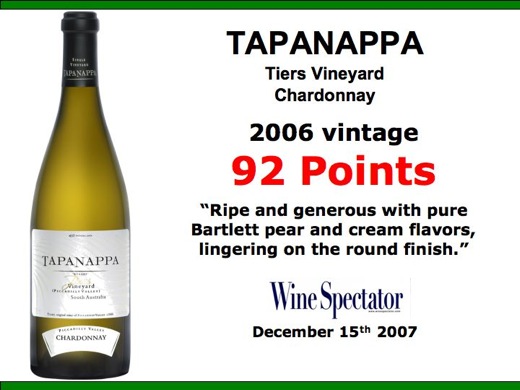 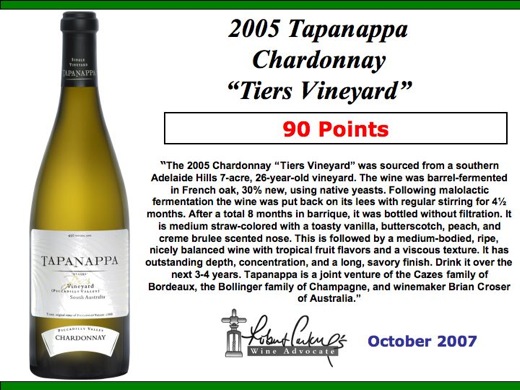 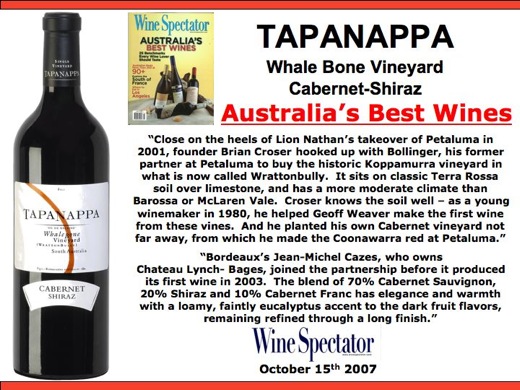 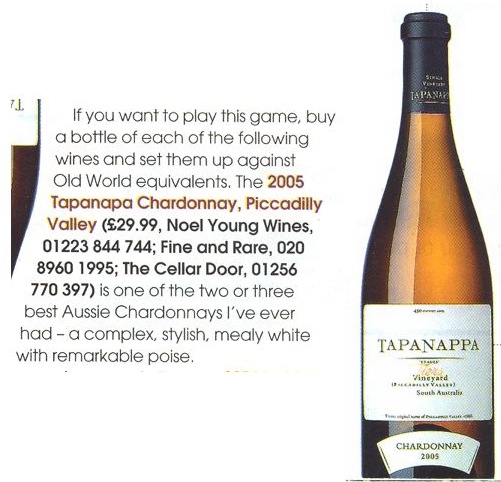 Despite the fanfare, I didn’t like the first release of this wine from the 2003 vintage. The new project of Australian wine legend Brian Croser, it had come from mature vines at Wrattonbully in South …

Tiers Vineyard Chardonnay 2005. Pale straw-green, a study in reserved composition, all the elements of melon, fig, nectarine oak and mlf so seamlessly interwoven they are all but invisible on a one-by-one basis; less in more. 96 points.… 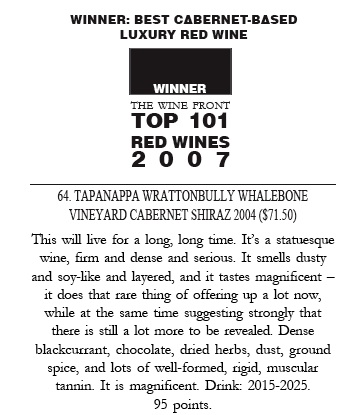 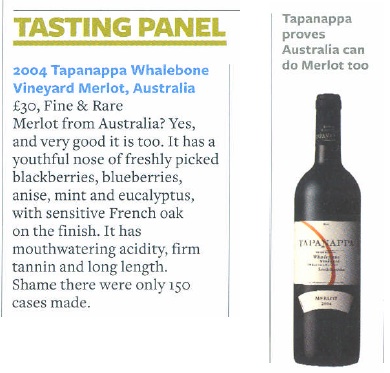 Taking on the World – In the Glass

Beautifully defined fruit, perfect poise and serious structure. Wrattonbully’s potential as a red wine region has attracted some heavy hitters and this wine is the strongest affirmation of that faith.…

The 2004 Tapanappa Whalebone Vineyard Cabernet Shiraz is a bright, expressive modern red. It has plenty of chalky limestone aromas, almost like wet concrete, with spiced berries, dried herbs and minty edges. The palate has an even-handed style, clever blending … 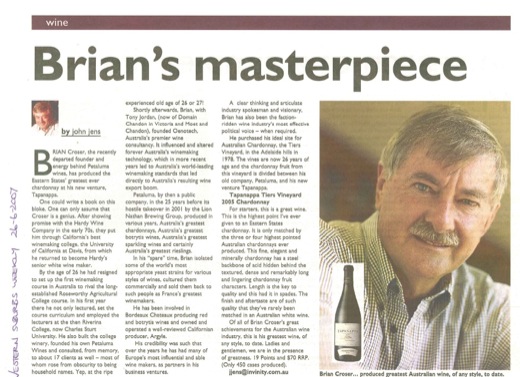 Taking on the World

….While it looks as if South Africa may be the target of quite a few more Bordeaux winemakers, there are increasingly few places in the world where the French can take the upper hand in joint ventures, as they clearly …

From Brian Croser, a very fine subtle wine of honeydew melon and nutty aromas, with oak and malolactic elements all finely bound into a seamless whole.… 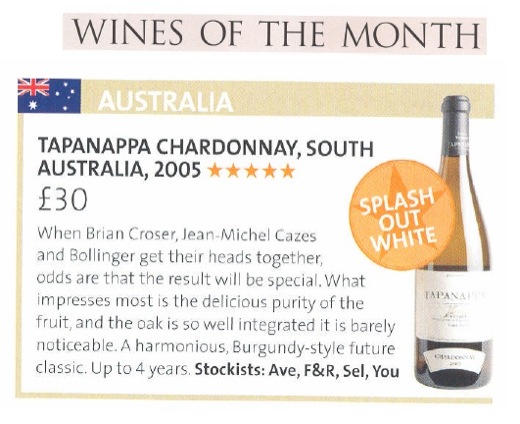 A more sumptuous wine than the grippy, edgy, energetic 2003, this 2004 is finely tuned, more relaxed and self-assured and, in truth, far more delicious! Tapanappa is fast-tracking at an impressive rate into the top echelons of the Aus wine … 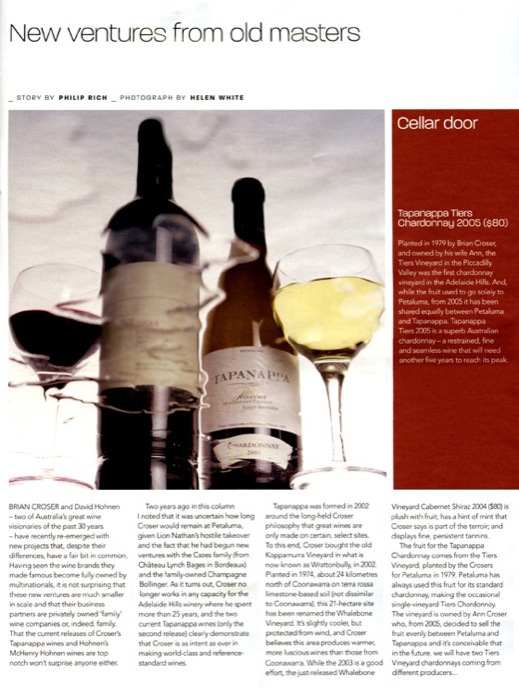 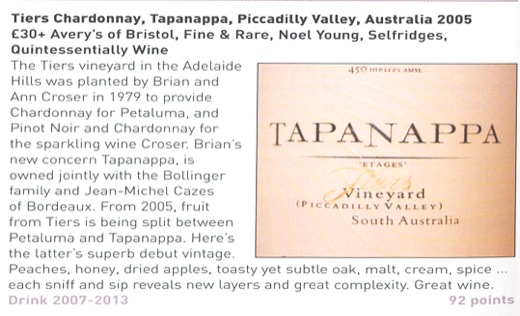 A big wine with a lovely range of cabernet aromas, from mint and herbs to abundant dark fruit. It’s concentrated and lingering, powerfully built and here for the long …

Later that day I proceeded to dinner with the same underlying message: there is never enough great wine and always too much mediocre product, the main virtue of which is its alcohol content. At the dinner the hosts were the …

Wine of the Month 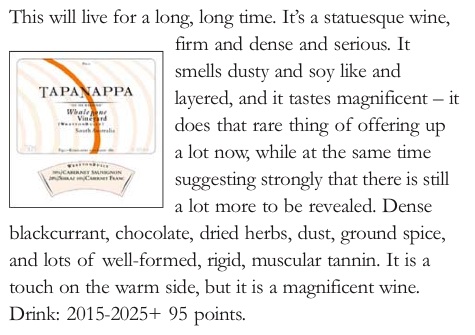 One for the Cellar 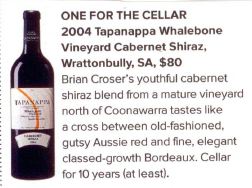 Tapanappa’s Whalebone Vineyard of 30-year-old vines lies just north of Coonawarra in the Wrattonbully region. This blend of Cabernet Sauvignon (70%), Shiraz (20%) and Cabernet Franc (10%) spends 18 months in all new …