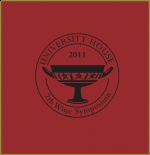 This will be a long and technical Blog. Even if no-one else reads it, the very writing of it will ease my mind.

The story begins with the rebirth of the ANU University House wine Symposia. The 7th was held last Friday after a 17 year hiatus, organised by Kiaran and Tim Kirk sons of John the founder of Clonakilla . In 1979 at the third Symposium I had the privilege of giving a paper called “Australian white wines-their history, current success, and future”. Helmut Becker, legendary professor of Viticulture at Geisenheim in Germany gave the next paper at the 1979 conference called ”Anatomy of a good German white wine from grape to glass” extolling  the increased vine yields and the commercial success of the German wine industry just prior to the collapse of the reputation and sales of German wine at least partially because of the dilute flavours of the dominant high yielding Muller Thurgau grape.

That’s all by the by.

The 7th Symposium was celebrating the 40th year of the modern Canberra wine industry and it is testament to the pure air and lifestyle in Canberra that at least 5 of the pioneers  from the ‘70’s were present and contributing strongly, being John Kirk (Clonakilla), Edgar Riek (Lake George), Ken Helm (Helm Wines) and David and Sue Carpenter (Lark Hill). What a transition in the 34 years I have known these pioneers! From struggling with the problems of frost, drought and obscurity in the market to one of the success stories of the modern Australian wine industry untainted by the general industry malaise and recognised as Riesling and Shiraz specialists. I sincerely hope that success does not invite unbridled investment and expansion but that would be defying the laws of economics (and greed).

The first two papers were about climate change where we learnt from Dr. Andy Pitman of a global conspiracy by dark, un-named, un-scientifics with some sort of vested interest, bent on perverting the true message of the enlightened scientists on the true extent of the drama of climate change.

But what to do?

Adapt or perish! This is a necessary strategy for ours and our children’s lifetimes at least. Cut emissions! Morally correct and effective for the long term future of our species and the rest of the globe’s biosphere.  Perhaps there is too much emphasis on the latter and not enough on the former currently.

Leanne Webb, Australian expert on climate change and the wine industry gave a paper “Projected climate: means and extremes. How this will impact the wine industry?”. This well researched paper depicted a certain hotter and probable drier future for Canberra, worse affected being inland than the coastal fringe regions.

The extrapolation of the temperature rise to accelerated vine phenology and earlier vintages culminates in a predicted possible 5C rise in harvest temperatures which would be difficult to manage. Evidence of earlier vintages over the past two decades in a number of regions (except Margaret River) supposedly supports this  prediction. I am bothered by this prediction on a number of counts. Firstly the change in viticultural practices in Australia over the past two decades has been dramatic. Virus free stock, precocious French clones on rootstocks, on closer spacing, vertical canopies, shoot thinning, crop thinning, more conservative irrigation regimes and methods, and although they rarely all play out in one vineyard (they do in mine) all of these advance crop maturity. It’s my bet that these cultural practice changes are at least as significant in advancing maturity as temperature rises. Leanne is attempting to research the relative contributions. As we have deliberately advanced ripening we are just as capable of retarding maturity through viticultural practice.
Secondly climate change is a relatively slow underlying increment of temperature compared to the 7 to 10 year weather cycles  wreaked on us by El Nino and La Nina and other shorter term largely ocean driven oscillations.

To illustrate this I have analysed the past two decades of growing seasons in the Piccadilly Valley and at Coonawarra where we have collected weather data.

Let’s start with the Piccadilly Valley.

Another way to look at this is to say that the cool cycle in the 1990’s was 97°C days below the average or for the 212 days of the growing season 0.46°C cooler than average

For the warm cycle of the 2000’s the summation was 86°C days warmer than normal or  0.41C warmer than average.

Is this just the Piccadilly Valley?

I have done exactly the same analysis for Coonawarra. From the Bureau of Meteorology publication Climatic Averages, South Australia and the Northern Territory published in 1975, the long term heat summation prior to 1975 was 1414°C days. The modern recordings from 1986 to today give a heat summation of 1414°C days from a different station. Not much warming there.

I want to switch from our own vineyards to Canberra. Canberra is constantly quoted as being a cool climate for viticulture. I recognise there are vineyards and opportunities for low summations in the vicinity due to altitude.

However Canberra is far from cool . The number that is used to support Canberra’s cool description is the 1424°C days quoted in John Gladstones’s masterly Viticulture and Environment. That number excludes all temperatures above 19°C because they are irrelevant to his purpose of estimating maturity dates. However they are highly relevant to the ripening of fruit, metabolism of acid, degradation of methoxy-pyrazine (green flavours) and accumulation of ripe  flavours and tannins.

Add back the degree days above 19°C in the months of January and February and the answer is a warm 1504°C days and most importantly a high day/night daily range of 14.2°C. Night temperatures are the problem in Canberra for ripening Cabernet Sauvignon not the heat summation which is more than adequate. Cabernet only requires 1320°C days to ripen. However the low night temperatures stop acid respiration, the degradation of methoxy-pyrazines and the production of ripe flavours and tannins. Shiraz needs less heat to ripen (1260°C days) and does not have the same problem of methoxy-pryazines. Hence its proven superiority in the Canberra region.

Libby Tassie gave a thorough paper on Alternative and emerging varieties: considerations, challenges and choices. The choice of new varieties to potentially help adaptation to climate change is very large.

I have two very simple tests as to that potential. They are does there exist a great wine made from the variety and how will the market receive it? Not many varieties of the 4 or 5000 known pass those tests and the ones that do are well known.

I think that is almost enough for the moment but to finish Brian Walsh gave a very thoughtful paper about the legitamacy of cross regional blends ans well as single vineyard wines. I have always supported both. How could you not with those wonderful Australian wines of the 40’s and 50’s. However Brian declared the core reason for single vineyard wines is to create wines of consistency. It is true we want our single vineyard wines to show an enduring vineyard character created by the unique terroir. However it is the inconsistency between vintages and treatments and picking different parts of the vineyard that adds interest to the story that goes with single vineyard wines. Given the quality passes the fine wine test that story becomes an important attribute.

There were so many things on the day on which I would have liked to comment but manners and time would not permit. This blong [Ed: blong is a BJC term for long blog post] serves the purpose of letting off a bit of steam about as very stimulating day.