Pale in Comparison by Huon Hooke 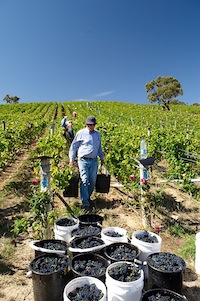 A super-wet season has prompted a perfectionist to sell off his pinot for a few dollars.

Brian Croser draws three samples of 2011 pinot noir from their barrels, all pale coloured but charming for their floral and cherry-like perfumes. Blend them and it would be a very attractive but pale-coloured, light-bodied pinot noir.

It would be the fifth vintage of a label hailed almost immediately as an outstanding pinot, the second- and third-crop 2008 and 2009 wines winning widespread critical praise. But Croser has made his decision. There will be no $55 Tapanappa Foggy Hill Pinot Noir 2011. And no, it won’t be relegated to his second label, the $39 [Ed: $29] Tapanappa Fleurieu Peninsula Pinot Noir.

He will sell it off as bulk pinot, and it will reward his labours with a few measly dollars per litre. Bulk Yarra Valley pinot noir is worth something but bulk Fleurieu Peninsula has no cachet; no value. And this after a super-wet season of expensive viticulture, when it cost more than usual to grow Foggy Hill pinot grapes.

”I can’t afford to sell it as Foggy Hill or Fleurieu,” a resigned Croser says. ”It will cost us a lot of money but so be it. It’s a tough game.”

I suggest the wine could be acceptable under the cheaper label but he’s unmoved.

”There’s a lot of pinot in the market,” he says. ”If we sold it, we would get shot at. We can’t afford to risk that. I’m happy with the flavours and aromas but it’s too pale and too light.”

This is the lot of the boutique winemaker with a long-term view. He has just four hectares of pinot noir vines on Foggy Hill, at the bottom of the Fleurieu Peninsula, South Australia, which has no other vineyards within cooee and is mostly given over to forest or cattle and sheep grazing.

Croser came here with grazing in mind, too, and now, eight years down the track, has two farms totalling 1350 hectares on which he raises TEFRom sheep.

The meat is sold under the Maylands Farm brand to a fine food supplier and the Rockpool Bar & Grill restaurants. The vines were an afterthought.

It all started with the 1998 Lion Nathan acquisition of the company he founded, Petaluma. He wanted to get away from the pressures of running a public company (he lives beside the Petaluma Adelaide Hills winery) so bought land at Tunkalilla Beach, Fleurieu Peninsula, on which he built a marvellous house in a wildly beautiful, splendidly remote place – a place he clearly loves, as he makes the 90-minute car trip from his Adelaide Hills home twice a week on average. He’d live there if he could.

Then one day his wife, Anne [Ed: Ann], caught him poring over maps and climate data. ”You’re not thinking of planting another vineyard, are you,” she asked.

”I think Anne felt a little betrayed at first,” he acknowledges, like a guilty boy who’s been keeping a pet lizard, unbeknown to his parents.

Soon, with three carefully selected clones of pinot beautifully sited on a high (350 metres to 400 metres altitude), cool, north-west facing slope, a famous French viticulturist visited and declared, ”This could be Australia’s Chambertin!” And it could. The ’08, and especially ’09 and ’10 Foggy Hill pinots, are sensational. The gorgeous, ethereal 2010 will be released in April.

It looks very Burgundian, too, with low-trained vines placed 1.5 metres apart and a density of 5444 vines per hectare.

Croser, always impressively precise, reels off the statistics from the top of his head. The vines are trained 900 millimetres [Ed: 600 millimetres] above the ground, cane pruned with two canes and 16 buds per vine. They yield five tonnes to six tonnes per hectare.

The vines are grafted to phylloxera-resistant, devigorating rootstocks – which he needs with nearly a metre of rainfall a year.

The soil is sandstone and ironstone: a warm, rocky soil that absorbs daytime heat and releases it at night.

But he is in a good place now, doing what he loves. ”I don’t have to do this,” he says. ”I could put my feet up if I want but that’s not me. I’m doing what I’m doing because I’m motivated.

”I’m not looking to get others to come to the Fleurieu Peninsula and plant vines to get a critical mass or a GI [geographical indication], I just want to make a great world-class pinot noir and I’m fairly sure I can do it there.”

He has obeyed the two main lessons he’s learnt from his 40-odd years in winemaking. ”Never buy grapes: always grow your own. And avoid corrective winemaking. Amelioration is an admission that you didn’t get the first part right, which is site selection and vineyard design. And that’s the part that interests me the most.”

Croser has put his money where his mouth is.