Brian Croser has been an innovator in the Australian wine industry for more than 40 years. 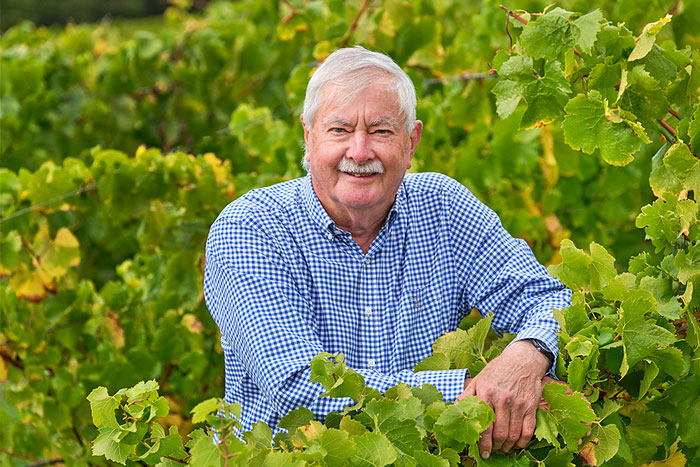 Educated at the University of Adelaide, where he was later Deputy Chancellor for eight years, and at the University of California at Davis, Brian was involved in establishing the Charles Sturt Wine Science degree in Wagga Wagga as well as many of the major Australian wine industry institutions through the 1970s and ‘80s.

A Fighter For Fine Wine

There have been few more influential figures in the modern history of Australian wine than Brian Croser.

“I always had the conviction that Australia’s national geographical attributes, climate and soils, its very stable temperate climate on the edge of the Great Southern Ocean, gives a climate the equivalent of 40-45 degrees North. We should be a major supplier of fine wine to the globe.

» Read more about: A Fighter For Fine Wine  »

Looking back at Australian Chardonnay

I think it was Xavier Bizot who had the idea of celebrating the fortieth anniversary of the planting of the Tiers vineyard in the Adelaide Hills in 1979.

He is the son-in-law of Brian Croser, who initially planted the vines for his nascent Petaluma wine operation. Much wine has flowed under the bridge since then,

» Read more about: Looking back at Australian Chardonnay  »

Note this report was also published at https://www.jancisrobinson.com/articles/south-australia-2020-unforgettable

Last time I wrote about the emerging 2020 vintage I was branded ‘a denier’, ‘a dinosaur’ and ‘an angry old white man with a tin ear’, among other compliments. Let me begin this final version with a disclaimer: A hotter and drier future cannot be denied or avoided and each of us can and should do our utmost to mitigate that.

THE TIERS VINEYARD TURNS 40. HERE IS A WHOLE LOTTA CHARDONNAY TO CELEBRATE

I’m in cleanup mode at the moment, sifting through the (physical) sample pile and my (digital) notes to tidy things up Kondo-style.

While it’s cathartic to delete some half-baked stories written late at night, I’ve discovered some unpublished gems too – just like this set of notes from the Tapanappa Tiers vineyard 40th birthday event held last year in the Adelaide Hills.

» Read more about: THE TIERS VINEYARD TURNS 40. HERE IS A WHOLE LOTTA CHARDONNAY TO CELEBRATE  » 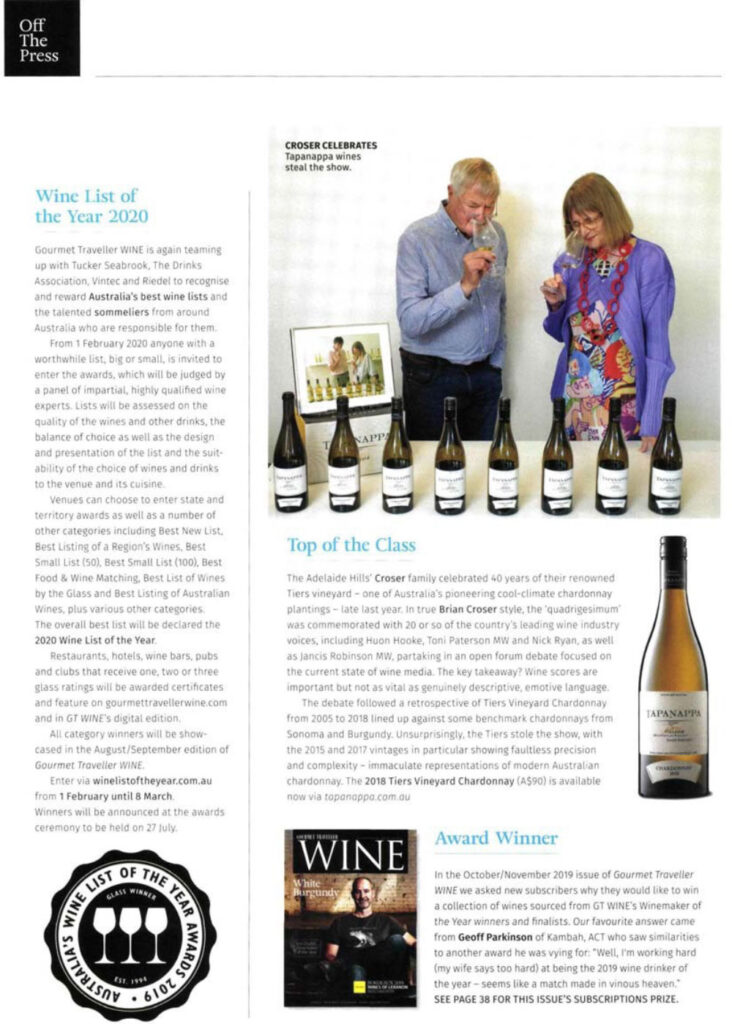 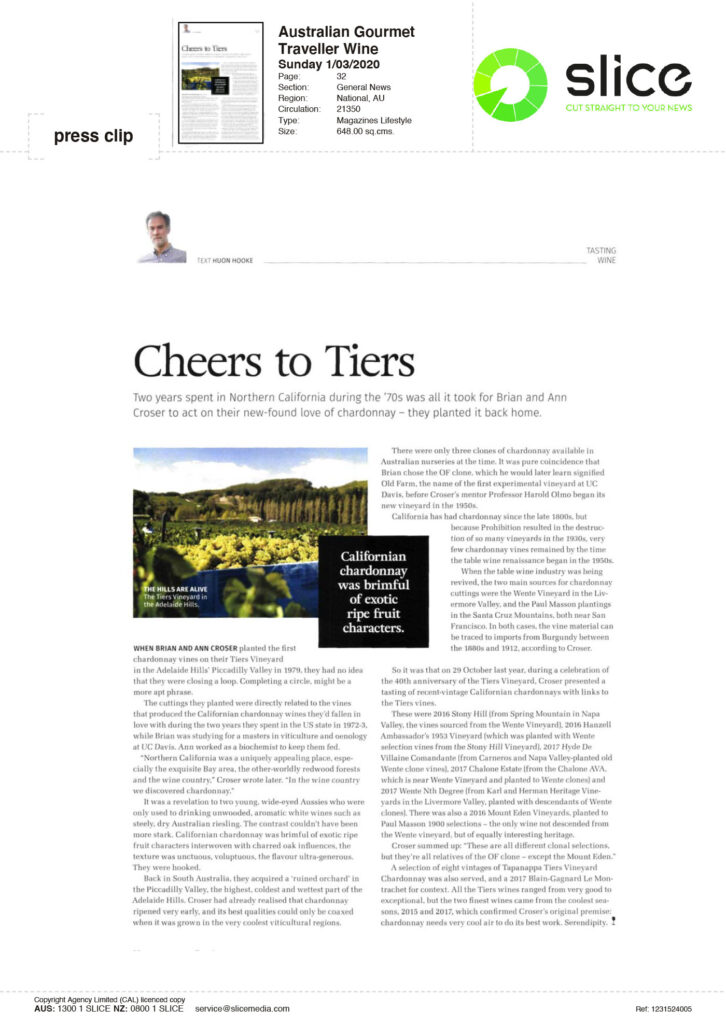 Leading winemaker Brian Croser AO shared his thoughts on smoke taint and the 2020 vintage in an article on the ABC website last week. Several people on social media criticised Brian for some of the things he said in that story. He was even branded a ‘dinosaur’. Here Brian iterates his thoughts on #V20.

» Read more about: ‘Be-Calmed’ – Brian Croser iterates his thoughts on the 2020 Australian Vintage  »

The low yield in the Piccadilly Valley was mainly because of the cold,

This book is the story of my life.

For a book that starts out by declaiming that it is not written to be read in one session,

The 2015 Fleurieu Peninsula Pinot Noir has once again picked up a gold at the Drinks Business, 2018 Global Pinot Noir Masters. Further raising questions over Brian’s decision to declassify this wine! In his summary of the competition Patrick Schmitt MW noted:

Once the wines surpassed the £20 mark, as one would expect,

The Story of a Chardonnay Clone

4 August 2020 See this update. It transpires that Gingin, Mendoza and OF are in fact three different clones of Chardonnay, albeit from the same block in California.

» Read more about: The Story of a Chardonnay Clone  » 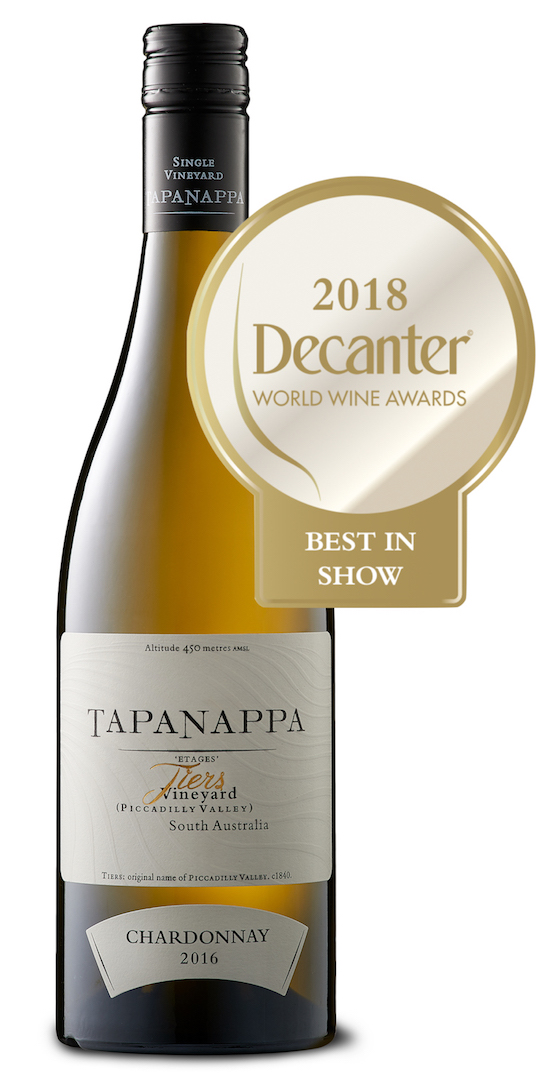 Being in the fine wine growing and making business is deeply personal.

I have spent 40 years choosing distinguished vineyard sites, planting them with the right variety, refining the viticulture and the winemaking and enduring the swings and roundabouts of the third party critical assessment of the wines. Like any parent I take offense when my wines (aka my alternative children) don’t achieve the points and accolades I think they deserve.

Read the rest of the review
Previous page Next page