The low yield in the Piccadilly Valley was mainly because of the cold, windy and wet weather at the time of flowering (end of November), interfering with fruit set.

This condition has implications for the 2020 crop as the fruit primordia being formed in next year’s buds at the same time as flowering will also be detrimentally affected, less and smaller bunches are likely. We could still have a perfect fruit set and normal crop in 2020 but the odds are diminished.

Consistent with the prevailing announcements of high temperature and low rainfall records being broken across our continent, Tapanappa has endured 4 consecutive above average temperature and below average rainfall vintages (except 2017) at all of its three distinguished site vineyards. With the exception of 2017, three of those (2016, 2018 and 2019) are among the warmest 6 vintages since 1960. 2016 and 2018 are the warmest two vintages in the Piccadilly Valley and at Parawa on the Fleurieu Peninsula since 1960.

In summary 2019 is a very high-quality, warm and dry vintage, cooler than 2016 and 2018 and perhaps honouring the time-tested aphorism,
“The best quality wine is made from a cool climate vineyard in a warm year.”

Hand harvested on the 18th of March, 1.5 weeks ahead of average. The crop level was 60% of average at 4 tonnes/hectare. The fruit was in perfect condition, in part reflecting the dry growing conditions.

Hand harvested on the 8th and 9th of March, 1.5 weeks ahead of average.

The crop level was 5.5 tonnes/hectare as expected. 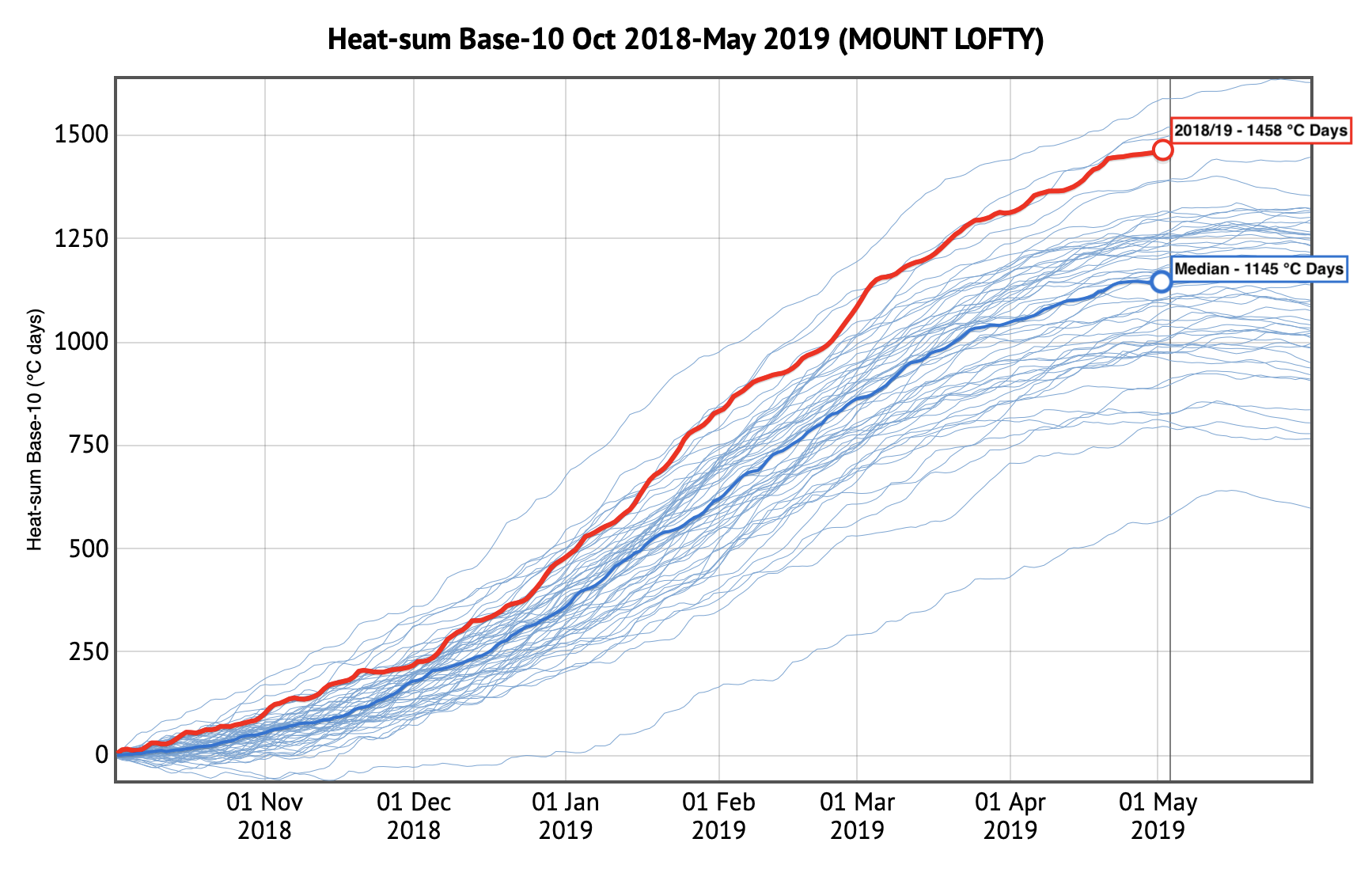 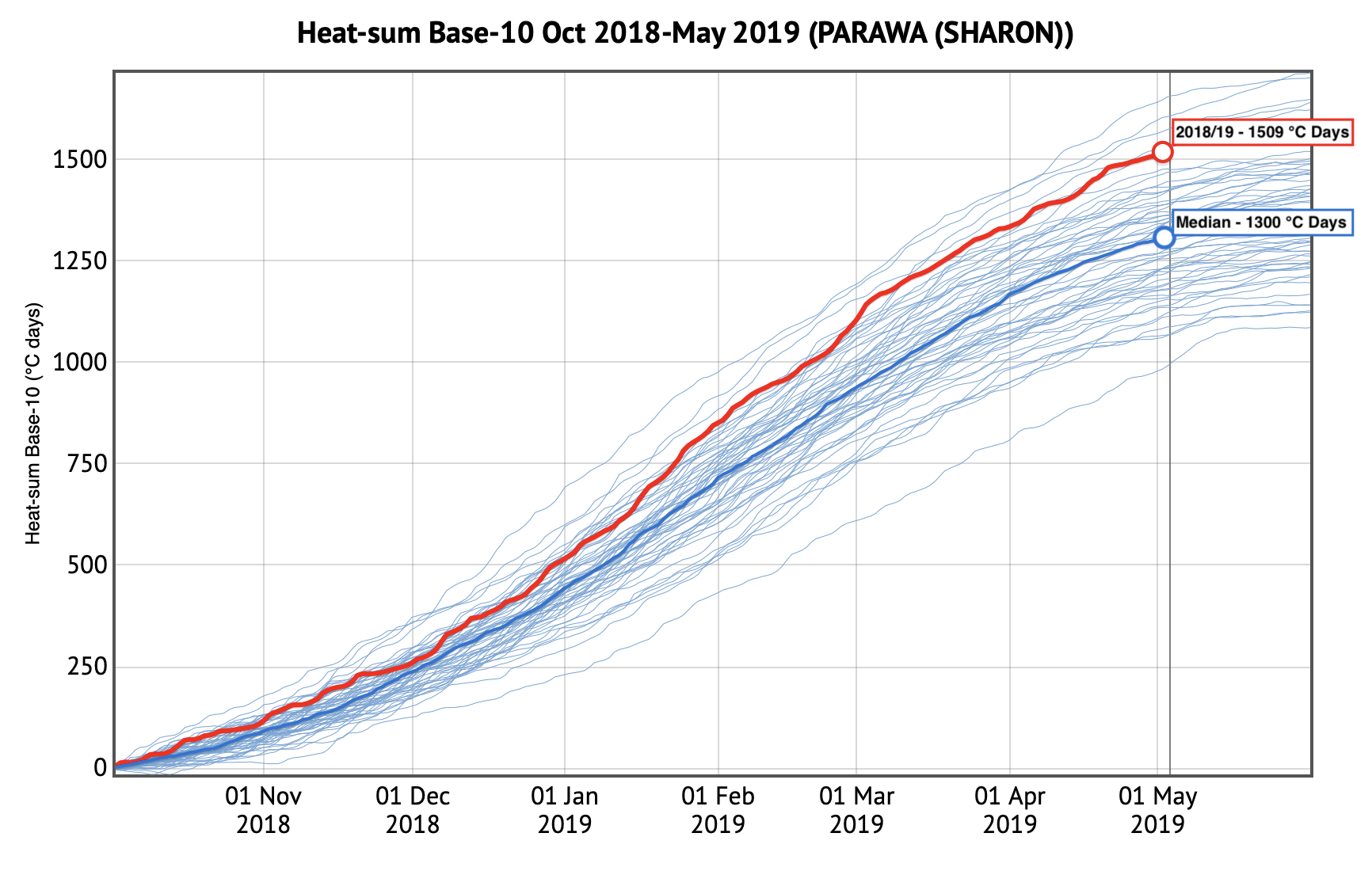 Despite 2019 vintage joining the ranks of the warmest vintages since 1960, the grape analysis and quality did not reflect that. This is also true to a slightly lesser extent, for the even warmer 2016 and 2018 vintages. In fact, the grape analysis for each of the last four vintages has been remarkably similar at the Tiers and at Foggy Hill and harvest dates have only differed in the very late, cool, wet spring 2017 vintage, the latest on record for both Tiers and Foggy Hill. The analysis for the 2017 grapes did not reflect a major difference with the warmer and much earlier 2016, 2018 and 2019 vintages.

Malic acid level is a very good proxy for the heat received by the grapes during the growing season because its degradation depends on the temperature and time on the vine. The malic acid levels in all four vintages across both vineyards are similar and elevated rather than depleted despite the abnormal warmth.

Similarly, in very warm regions and seasons the sugar level in the grapes can be severely elevated but in in all four vintages and both vineyards the sugar levels remained modest despite the abnormal warmth.

With the expected very hot 2016 being slightly higher Brix and lower malic acid and the cooler 2017 having slightly lower Brix and higher malic acid, the grape analysis and quality for all of these vintages is remarkably similar given the very significant departure from the average heat summations depicted in Figure 1.

Expecting the worst of these very warm vintages, high sugars, low acids, over-ripe flavours and coarse textures, my fears have been unfounded. All of these vintages from both vineyards express fresh Pinot Noir and Chardonnay varietal characters, with low to moderate alcohols and lovely acid balances and for the Pinots refined tannins.

This an existential question as we face more higher temperature vintages.

It is the question at the heart of the speculation about regions having to change varieties as they progressively warm.

Cause and effect are never simple relationships in nature and I have searched the numbers and my soul for the answer for this apparent uniformity and moderation of temperature effects across these disparate and very warm vintages.

Prompted by a casual conversation with my hero, Dr. John Gladstones, I decided to backout the temperature increases at night from the growing season heat summations and essentially restore them to the average night contribution. My rationale is that night temperatures are very moderate and have marginal influence on vine catabolism/anabolism and of course non on photosynthesis. It is day temperatures that dramatically affect fruit composition and in the case of Chardonnay and especially Pinot Noir high temperatures result in a loss of the quality and intensity of varietal character.

My second thought was to compare the critical to quality, post veraison heat summations for each of the vintages and sites. Just as day temperatures are critical to the metabolism of the vine, the post veraison ripening processes are critical to final grape composition and quality. February and March are when nearly all of the colour , sugar and flavour are developed in the berries and when the tannins are modified to be less bitter and astringent.

Ironically the coolest vintage 2017 has the highest heat summation for February and March in Tiers and second highest in Foggy Hill, another force for compositional and quality convergence between vintages.

We won’t have to plant Grenache in Piccadilly Valley or at Foggy Hill after all. Apparently very warm vintages are more moderate than the crude total summations suggest and the quality of the wines is certainly testament to that fact. Whew!

2019 was not as extreme at Whalebone Vineyard, Wrattonbully, as it was either in the Piccadilly Valley or at Parawa (Fleurieu Peninsula).

Although warm 1629°C days versus the average of 1466°C days, harvest was normal timing even slightly late for Cabernet Sauvignon.

Yields were small for Cabernet Sauvignon at 2.5 tonnes/hectare and more normal for Merlot and Cabernet Franc.

The hotter than average months were December, January and February and the ripening occurred in average temperature conditions in March and April.

The fruit was in perfect condition with moderate sugar content (brix) and acids and great colour and flavours. 2019 could be a banner year for Whalebone Vineyard.

Here is a comparison of Wrattonbully and Coonawarra for vintage 2019.

COMPARISON OF 2019 VINTAGE AT WRATTONBULLY AND COONAWARRA 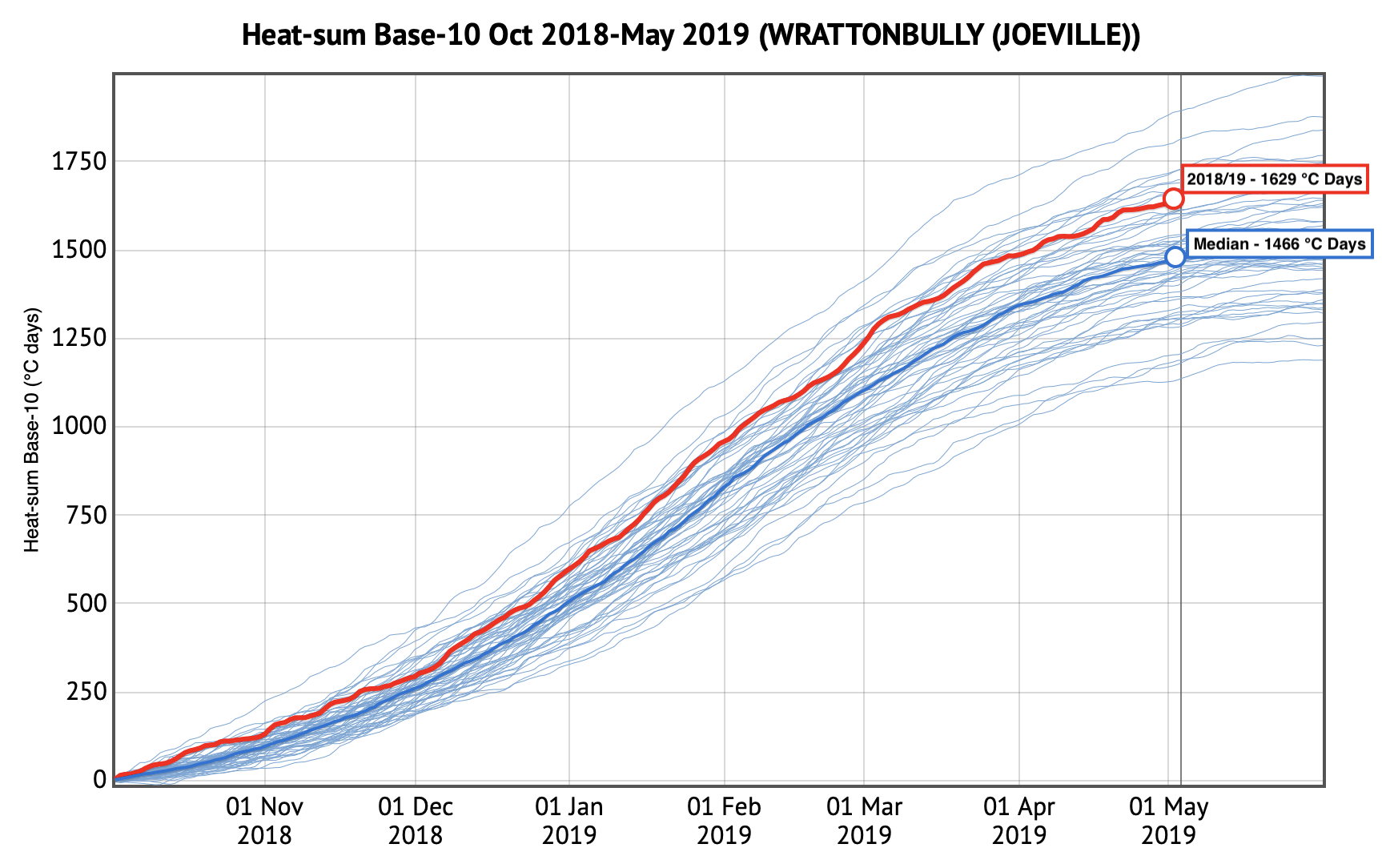 All graphs and heat summation averages were taken from CliMate or BOM stations.