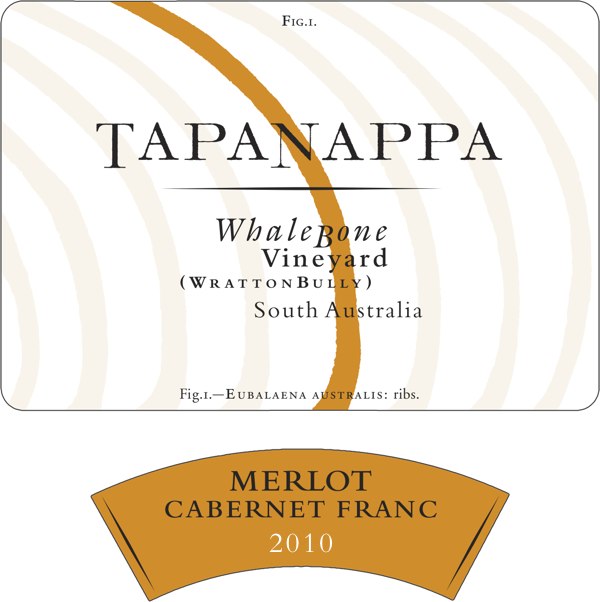 The 2010 vintage was the warmest of the 12 vintages that Tapanappa has owned the Whalebone Vineyard. The heat summation was 1608°C days versus the 14-year average of 1446°C days. Since 2010, 2012 and 2013 accumulated nearly the same warmth and each of these three vintages can be acclaimed as excellent to outstanding.

2010 at Whalebone Vineyard was absent heat waves and most of the extra heat was due to a very warm November, the rest of the season being moderate and close to or cooler than average.

The condition of the fruit was excellent and the balance of the fruit allowed the production of moderate alcohol wine with an adequate natural acid.

The Merlot and Cabernet Franc were hand harvested and delivered to the Tapanappa Winery in the Piccadilly Valley where they were de-stemmed, gently roller crushed and chilled to 2°C in 0.8 tonne fermentation tubs.

21 days after harvest the tubs were tipped into a small air bag press and drained and pressed directly to French oak barriques, 70% new, in which the new wine remained on full lees through malo-lactic fermentation.

At the finish of malo-lactic fermentation, the wine was racked off lees and returned to barrique.

The Merlot and Cabernet Franc were clear racked from barrique, blended and bottled in February 2012 after 22 months in barriques.

The taste of the wine

2010 was a wonderful warm and dry vintage, perfect conditions for the Whalebone Vineyard terroir to elicit the very best from the old Merlot and Cabernet Franc vines.

The warm vintage Merlot from Whalebone Vineyard had very ripe plum and spice with the big blocky tannin structure that is only apparent when Merlot is grown in a highly suited terroir and a warm vintage.

The combination of the Merlot and Cabernet Franc has a synergy for which the wines of the “right bank” of Bordeaux have long been famed.

In a rare departure from the normal the Cabernet Franc is the dominant part of the blend, 58% and also dominates the aroma, flavour and tannin structure of the 2010 Tapanappa Merlot-Cabernet Franc. The foundation of this wine is solidly Merlot and the superstructure ethereally Cabernet Franc.

2010 Tapanappa Merlot-Cabernet Franc is the product of a great warm vintage and “is a pure expression of the unique terroir of the Whalebone Vineyard.”