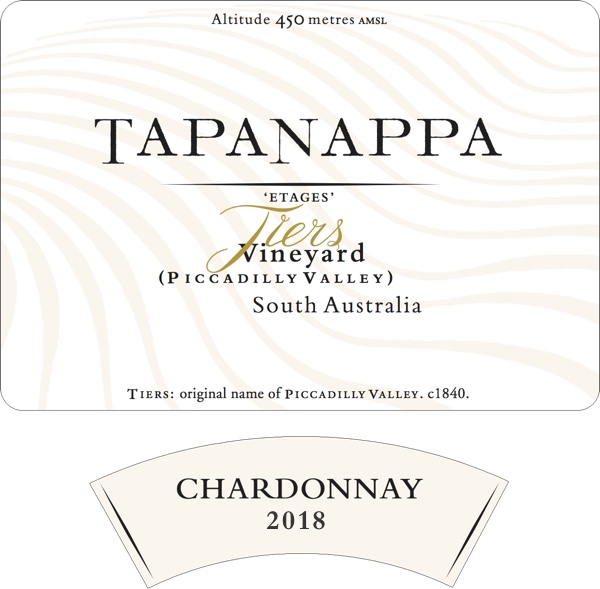 Although amongst the warmest vintages on record, 2018 Tiers Chardonnay was harvested on the long-term average date of March 26.

The answer is that a lot of the above average heat in 2018 was at night. Higher but still moderate night temperatures don’t affect vine physiology as much as day temperatures.

The January to March rainfall in the Piccadilly Valley was less than half of the average.

Despite being warm and dry there were no heat-waves in the Piccadilly Valley for the 2018 vintage. The Tiers Vineyard delivered disease free, thoroughly ripe Chardonnay fruit in perfect condition and at moderate sugar levels.

2018 will be recognised as a warm vintage eliciting ripeness and intensity in the Chardonnay from The Tiers vineyard and the Piccadilly Valley in general.

The warm vintage conditions in 2018 allowed it to show its best ripe fruit qualities.

The Tiers Old Chardonnay was hand harvested into shallow trays and cooled to 2ºC in the cold room at Tapanappa Winery, adjacent to the vineyard. The whole bunches of Tiers Chardonnay were tipped from the trays into the Willmes Merlin airbag press. The juice was gently pressed from the bunches, into a settling tank. After a short gravity settling the partially clarified juice and its fluffy lees were racked to French Vosges oak barriques, 33% new and the balance 1 and 2 use.

The Tiers Chardonnay was seeded with our own yeast culture and allowed to ferment in the cool air temperature of the Piccadilly Valley autumn.
None of the 2018 Tiers Old Chardonnay went through malo-lactic fermentation because of the warm vintage and the whole was allowed to sit on full fermentation lees until clear racking in January of 2019.

The post bottling analysis of 2018 Tiers Vineyard Chardonnay is

Lemon yellow in colour, 2018 Tiers Chardonnay has ripe and fresh fruit aromas and flavours of peach and fig. The subtle complexity of oak vanilla and toast and the brioche of yeast lees complements the fresh fruit.

The 38 year-old Tiers Vineyard has clearly confirmed its status as a “distinguished site” and the 2018 Tapanappa Tiers Chardonnay “is a pure expression of a unique Australian terroir.”