Cellar Door open Fri - Sat, 11am - 3pm for takeaway wine sales only. Give us a call (08) 7324 5301 or email cellardoor@tapanappa.com.au, we will deliver free to your door Australia wide 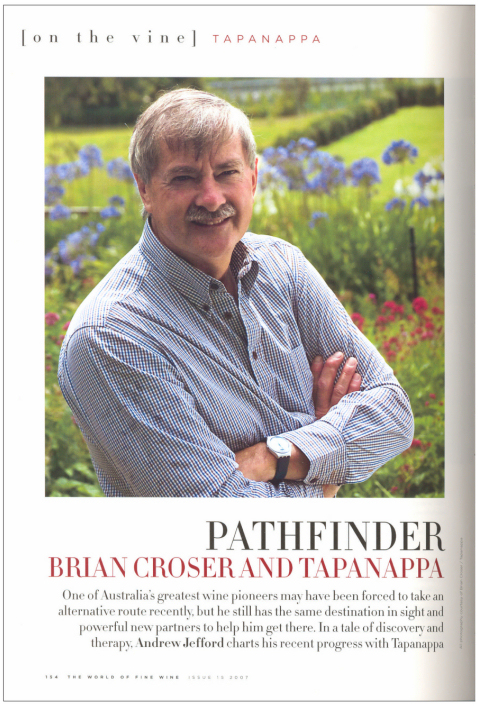 With Bollinger, Lynch Bages and Brian Croser involved, you would expect something flash ? and it is. Reeking of fancy new wood, it's a sophisticated but distinctly Australian cabernet shiraz with great length and persistence ? one for the cellar.

Is there a serious wine drinker in the country who isn't aware of Coonawarra's terra rossa phenomenon? The region and its wines, and the importance of the terra rossa soil, have been major players at the pointy end of our national wine story for many years, and whether the debacle over the Coonawarra boundaries helped or hindered the region's status is a topic in itself.

Far less enshrined in our culture are the newer vineyards to the north of Coonawarra, many of which (if you take the propaganda on face value) have much the same attributes as the better Coonawarra vineyards (varying depths of terra rossa over limestone, relative coolness and low summer rainfall). You might have heard the region called Koppamurra or, more likely and today more correctly (at least in a legal sense), Wrattonbully.

The name change came after a wrangle between Koppamurra Wines - one of the founding vineyards of the area - and newcomers using the Koppamurra moniker - hence the shift to Wrattonbully.

The growth of Wrattonbully's vineyard area has been incredibly rapid over the past decade. The original wineproducing vineyards were planted there in the 1960s, but as recently as 1993 there was less than 23ha under vine.

Today, more than 2600ha are farmed for wine production, and the growth continues, albeit at a slower rate.

Incidentally, it's the original Koppamurra vineyard that the Tapanappa crew (Brian Croser, Jean-Michel Cazes and Champagne Bollinger) purchased in 2002.

This vineyard and its crew are no doubt destined to do a great deal in terms of raising the Wrattonbully profile.

Brian cites a 1980 cabernet sauvignon made under Geoff Weaver's Ashbourne label - the first wine from the Koppamurra vineyard - as the inspiration behind the purchase of the property.

The renamed Whalebone Vineyard has released two vintages of Tapanappa Cabernet Shiraz (2003, and the awesome 2004), plus a 2004 Merlot. The wines retail for about $70 a bottle, so they are an expensive introduction to the Wrattonbully region, but worth every last cent. 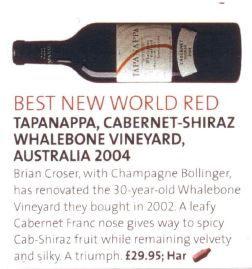 Tapanappa 2004 Whalebone Vineyard Cabernet Shiraz: This complex and seamless red shows mulberry and blackberry fruit, with spice and licorice on the nose and palate and fine dusty tannins on the finish. Try it now with roast lamb or cellar for another five years or more. $80. Rating: 94 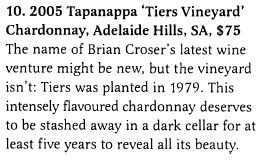 Tapanappa Whalebone Vineyard 2004 Cabernet Shiraz included on the list of the best events, interviews, films, food, wine and books for 2006 in Brisbane, saying:

"With its taut structure, this wine ($75) is the best Australian red released this year. It has great finesse, combining Brian Croser's frightening intellect and gossamer touch with Australia's traditional (albeit fading into obscurity) red blend."